Our First Day In Singapore (Part 4)

continuation of Our First Day In Singapore (Part 3) – November 14

Procrastination is probably one of the most common problem people have in their day to day life. Including myself, that is. After having experience with procrastination, I realized procrastination itself causes more pain than actually doing what I suppose to do. Everytime I check on our blog pages and see posts that are meant to be continued without ever reaching a conclusion, it gives me a pang of remorse. So today I’m making a deal with myself to JUST DO IT.

FIRST NIGHT AT THE ESPLANADE

We had a great day since we landed in the city. Walking the streets of Singapore and doing some food tripping and sight-seeing. By the time we got back at the hotel we hardly had time to rest and wash up to catch Techy Romantics’ set. We missed it! By the time we reached the Concourse, Carlos Castano was already setting up.

We met other artists from the Philippines and some friends who are already based and working in Singapore. I also had the chance to meet Rebecca Lincoln, a freelance music journalist, who was the first one to write about The Camerawalls and recommend us in a music blog called Power of Pop.

We roam around the area feeling the vibe and checked out the Arena where we are suppose to perform the next day. In our hearts, we felt extremely lucky to be chosen to perform on the best and biggest stage, with a good time slot. We secured good seats and watched a Singapore superband called Typewriter. Pretty good. But the hightlight of our night was when Jon Auer went onstage and jammed with Typewriter and sang songs from his band The Posies like “Flavour of the Month”. Now that’s in your face POP!

Jon Auer of The Posies jamming with Singapore's Typewriter at the Arena.

When the music ended, excitement of the evening still floats in our heads. The night was young so we decided to indulge ourselves with their local beer and delicacies. Chili Crabs and dimsums in a 24-hour open food court near the Grand Pacific Hotel. Tiger Beer simply contributed to a perfect nightcap. 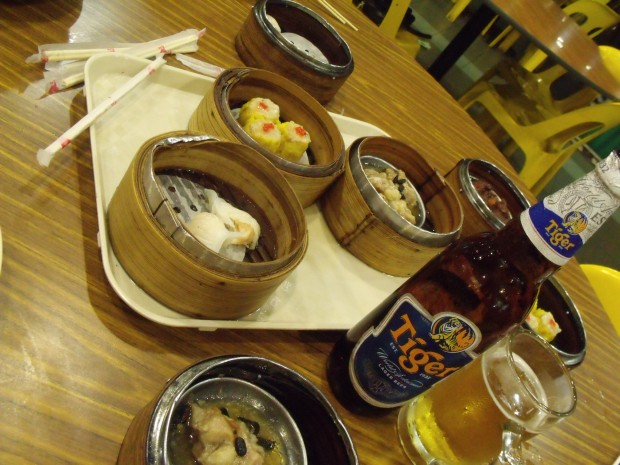 “An oppressive government is more to be feared than a tiger, or a beer.”  – Confucius