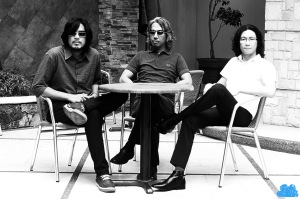 A couple of weeks after our Southeast Asian Tour in August 2012, we decided to cool-off from months of promotion and gigs that burnt-out all of us. Personally, the only time I don’t consider being in a band as work is when we are creating and recording new music. It never fails to excite me. Gigging on the other hand is different, sometimes tiring, sometimes disappointing. Being an indie band in the ever-changing music industry landscape is very challenging. So I took my leave and went on a five-month vacation in the US to rest and contemplate. I encouraged my band mates to focus on their work, family and other interests.

As soon as I got back in 2013, the idea for Dragonfly Collector (my first solo project) was born. I took my time, wrote new materials inspired by my travels, tried a different approach, collaborated with other musicians, recorded everything in 2014 and  on January 2015, I released “The World Is Your Oyster.”

It’s a wonderful transition. But there is one problem: I miss The Camerawalls.

So after more than 4 years of hiatus, Law, Bach and I are happily talking again about the prospect of recording new music and a series of not-so-frequent gigs that will kick-off on December 10 at 70s Bistro. A reunion of sorts and the revival of The POP Shoppe, the event umbrella of Lilystars Records.

I never thought how thrilled we are to be able to say this…  THE CAMERAWALLS IS BACK! So to all our loyal followers and new music fans who discovered our releases during our absence, the wait is over. Expect new music and see you in the gigging circuit!

Like Loading...
Tags: bach rudica, clem castro, clementine, dragonfly collector, law santiago, lilystars records, the camerawall, the pop shoppe, the world is your oyster
From: News
← Seasick Yet Docked
Pocket Guide To The Otherworld Reissue Cover Art →
No comments yet