Clementine, formerly of Orange and Lemons set out to start something new when he put together the band The Camerawalls.  With Clementine as songwriter and lead singer, George Carillo on guitars, Law Santiago on bass and Bach Rudica on drums, the band has whipped up a storm in the independent music scene.

“If there is one word to describe me and my band it’s reinventionists,” Clementine once said.  “I like how our records seem timeless. Listen to it now and listen to it again after five years and it will still sound fresh.”

So far the band won the grand prize in the John Lennon 71st Birthday Songwriting Contest for their song “Birthday Wishes” in November last year among its first harvest of accolades.

Clementine and the rest of The Camerawalls talked over coffee with the Play! pool during their recent visit to Cebu to promote their latest set of records, 2010’s Bread and Circuses and lend their voice to the cause of raising funds for a livable Cebu.  Read the band’s take on music-making, the independent music scene and other subjects musical in this interview.

How was the band formed?
Clem: I’ve been in the music industry for more than a decade. I’m a former member of Orange and Lemons. I’ve been playing music since 1999 and until the band dissolved in 2007. Then I formed a new outfit called The Camerawalls and later on, we’ve had additions to the lineup so it’s been almost four years now for Camerawalls. From indie to major label outfit until I put up a record label named Lilystars Records, an indie label for artists.

How did you come up with the band name?
Clem: The original line up, there were three of us and we tried to anagram our names, forming the word “Cinemawall.” But it is too common when you google the word that’s why we made it Camerawall and added the “s”. We liked the name so we sticked with it. It’s very indie and different sounding and I think it reflects the band.

How do you describe your type of music?
Clem: Well, I think it is safe to say that we are pop musicians. Indie is just a tag we use to describe the genre but we can reinvent ourselves. When you say pop, it is easy to do indie pop, pop rock and so on, but we don’t want to limit ourselves to just being indie pop, we can be more flexible when we do music. When you listen to our recordings, it’s quite diverse.

Your musical influences?
Clem: As a whole we love The Beatles, British pop music and new wave bands — especially for me, I am a very big fan of The Smiths. We also love guitar jangle pop of the 80s so basically our influences are British musicians.

How about your personal musical influences?
George: I used to play different types of music and listen to different genres. My favorite band when I started playing the guitar was Pink Floyd and The Beatles, a lot of British bands as well. 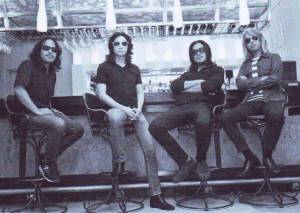 How did the band connection happen since you have different musical preferences?
Clem: With The Camerawalls, it’s more spontaneous. We are more light-minded when it comes to creativity, so in the creation process of the music, there is a share from each member, except for George since he’s still new with us and were still working out the music with him. But with the rest of the band, we’ve been doing this since 2007 so it is very collaborative. I’m the chief songwriter of the band and the melody maker, so the process is, I present to them some ideas then we jam it during rehearsals and each one contributes something really nice for the record. The chemistry is there.

What is your creative inspiration when it comes to writing songs? Do you need a particular place to write the material?
Clem: I don’t have a set practice in songwriting; it just happens when you have a muse present or when you’re emotionally excited or emotionally down. Or you have a friend telling you interesting stories. Sometimes I do that; borrow stories from people and write about it, but most of the things are write are from personal experiences. Songwriting becomes an avenue to release my feelings and emotions. When I write songs, nauuna ‘yung lyrics tapos I find a particular mood that will suit the lyrics of the song. Some are from what I feel, some are from, sabi ko nga experiences ng ibang tao. For example I wrote something about death when a friend of mine’s mom passed away. I also wrote about being clinically dead when a friend of mine experienced death for a few hours but I exaggerated and entitled it “Clinically Dead For 16 Hours”. At some point, I also get inspiration from arguments like I had this one with a film producer because he said, “Why don’t you make music for the Philippines?”  since I was writing in English most of the time.  That’s because we don’t want to limit ourselves. We want our music to be appreciated everywhere.  To this film producer I cited Jose Rizal, who studied from Western sources. He went to Spain to study medicine and wrote his novels in Spanish. That argument inspired me to create music for one of Rizal’s poems that is included in our album and I sang it in Spanish.

How does it feel to be managing your upcoming album so to speak?
Clem: At one point it is good to be in control because I’ve really had a bad experience with my former band, former label and the old management. I just write music, I don’t really care about the business side of things, but eventually realized that for every band or musician who wants to aspire to become a hit, one day, they should also learn the importance of music business. That’s why I formed a label without knowing how to work it, I just said I want to form my label, I don’t want to get signed to a major label. I want to learn how to do it, sort of vanity project, but it is not. At first, I formed Lilystars Records to support my own band’s releases, but after that, it became into a proper label when I started signing bands, local acts from Manila and Bulacan. I have three acts right now and just last year, I distributed for one very popular band from the States. In the coming months, I plan to release more foreign acts. They were really interested to distribute in the Philippines and I think it’s timely that I did what I did four years ago because major labels are closing down. EMI and Sony closed down so the musical landscape has changed and I think I made the right decision to start my own label. At the same time, I learned a lot by interacting with people on a personal basis rather than giving it to a manager or someone who doesn’t understand your music and direction you want to go to. Like for The Camerawalls — it was not created for money. We just wanted to make a good product and let the product speak for itself.

How long have you been playing guitar?
George: On and off. I started learning when I was 15 and I’m 34 right now. I met Clem in 1999 when we were like 21 and played in a certain bar in Bulacan. That time, I was the singer of a band and Clem saw me play the guitar once. It was an on-and-off process but I also started to learn different guitar styles. I have a definition for my style.

Have you ever played the guitar to woo a girl?
George: Yes, most of the time.

And has it been successful?
George: 88 to 90 percent. It really works!

What are your standard pieces when serenading a girl?
George: Basically folk songs like James Taylor, John Denver and some local artist as well.

Is it true that drummers are temperamental?
Bach: Well, not really because for me, the drummer should be the most relaxed because I am the time keeper.

Doing gigs, do you like big crowds or more intimate venues?
Clem: I prefer intimate settings like tonight in Handuraw. It is going to be an intimate set-up so we created this bar tour with the idea of playing for small crowd. I have experienced playing in large coliseum all over the country pero iba pa rin yung walang “hawi boys,” yung puede ka talagang mag interact sa crowd. The people who go to our gigs are the ones who really love or understands the music you are playing. Not because you are popular, not because you are pogi. I don’t really understand that. So I prefer small settings.

Is the audience reaction when you are playing also a factor to the level of performance you give?
Clem: Yes, of course. If it is quiet, then they are listening. I like it when I see them not talking and just listening, feeling your songs. You can see that the music is effective when the audience is listening. Although I don’t think we are very popular in terms of the branding of the band. We’re trying to find a niche market and with interviews like this, hopefully we can spread the word. It’s basically through word of mouth. We don’t have television or radio support. It is just word of mouth. It is nice to see people discovering your music and, surprisingly, they buy it even when there is piracy going on. Real fans are buying the CDs.

What do you do when you are not making music?
Clem: What do I do? I haven’t really gotten a real job since I graduated college. I never practiced my course—HRM. I even have a scholarship grant in Switzerland and I did not take it. In high school I discovered that this is the thing that I wanted to do, that I have a knack for writing music. I thought I should use the talent and followed my heart. It seems like I did not work my entire life. Music is what keeps me busy, and now there’s the business side, I’m learning more and more.

Any word for aspiring young artists?
Clem: They really have to know the “why.” Why are you doing it? Why do you want to be a musician? Because if you know your “why,” it will be easier for you to set your mind on how you will do it. There are so many reasons why you gig–for money, fame, to get contacts, to travel–if you know your “why,” mas magiging solid ang direction mo. In anything we do, it is important to know why.

And for you–why?
Clem: Of course, we want to gain recognition in what we do. But I am doing this more for myself and not for other people. We are not making music to please other people. But, the good thing is, when the music we make please us, it connects to other people as well. And that’s the beauty of that. When people get to connect to the music that you make, that’s the added plus. We stick true to our music.