The Clemency Of Castro 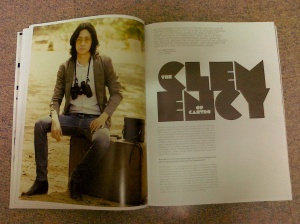 Music’s enigma continues to propel on the lives of few recurring artists. The star of his own visionary sequel, Castro challenges the limit of artistic creativity with a dimensional twist that’s poised  to take him to the international scene. Drawing distinctive inspiration from Swedish Pop influences and personal ingenious spunk, Castro scores the high notes one lazy afternoon with Spark.

Formerly of the band Orange & Lemons, indie pop artist and producer Clemen Castro’s uncanny resemblance to music icon John Lennon  is quite sadistic as it is accidental.  He carries with him The Beatles star’s disarming good looks, the quiet air of regal superstardom, and even a little bit  of the controversy (if not tragedy)  that accompanied Lennon’s life and career.  Believing that “whatever doesn’t kill you, simply makes you,” Castro’s jagged road to sole salvation ushered in too many blind sharp curves and freeways of free-spirited madness. Now on his own and with a record label named Lilystars, Clemen Castro (Clementine) is an indie crusader out for poetic justice. Nicole Torres unmasks the young man behind the emerging icon.

How did you transition from Orange & Lemons to being on your own, to having another band like The Camerawalls?

It’s inevitable. Once you have [a path that you] believe in, there’s no stopping you from doing it all over again.  I considered Orange & Lemons as practice—very good practice—in writing songs, in developing myself as a songwriter and as a vocalist, in finding my own voice and learning more about the music there is. Now is a very good opportunity for me to learn more about the business side of music; that’s why I formed my own band. I manage it as well, and decided to support it with my own record label.  Let’s say I’m a happenstance producer or something like that. I don’t know how—I don’t know how I pulled it off—but there is this desire. I did it while I was learning it, so everything just followed.

Right now you have Lilystars Records. Tell us about the other bands under your label.

Right now we have three bands: my band, The Camerawalls; The Gentle Isolation; and Your Imaginary Friends. I was also the first to be able to release singles here in the Philippines in a statistical format—singles from Turbo Goth and The Bernadettes, which have remixes of the same song each, like two recordings in one packaging.  It was an experimental [initiative], but I think it benefited the band because they were able to build a very nice following and imaging. Right now, though, they’re not under Lilystars anymore so I’m helping two new bands produce their own EP’s which we plan to release very soon.

And recently I heard you had a live concert event with an international indie Swedish band called Club 8. How were you able to do that? Not a lot of people can pull that off.

I never planned to be a producer of events, especially not big concerts.  Let’s just say, again, that I’m a happenstance producer because I was invited by a producer to be partners in this venture and he asked me to represent the Manila leg of the concert and I happily agreed without knowing anything about it. So I studied it, figured how to pull it off, then tried it. It was my first time to pull of something like that, and I learned a lot and I think that all the fans who came there, all the people who watched the concert, are very happy with the results.

If you would be able to bring in more bands here to play live with them, what would be some of the bands?

Since we have acquired some experience, we are looking at the end of the year or next year to bring another foreign indie act here in the Philippines. I don’t know yet—people are asking for Camera Obscura, some for Belle & Sebastian, because they are playing in Jakarta on August.  I think they are touring for a festival so people are asking us to bring them here.  It’s easier said than done. To produce a concert like that is very tedious but we are planning another one and Club 8 has expressed their interest for another concert in the country. Karolina and I are also planning to do a collaboration for some time in the future so I think right now, anything could happen.

I wish you all the luck then. Last question, what can you say to people comparing you to John Lennon?

(Smiles) I really don’t know. It’s flattering but at the same time… disturbing. There was no real intent to like like him; it just so happened that there’s a resemblance and I’m very fond of his Lennon glasses—which I don’t wear anymore because I get that a lot.  “Hey you look like John Lennon” or “Hey you look like Yoko.” (Laughs) I don’t know what to say. It’s amusing to hear those kind of remarks. I don’t mind because I’m a big fan of Lennon and his work, so there.