Sid & The Legend Of Condo Guz

For once I’d like to deviate the attention on this blogsite from The Camerawalls by sharing a piece of documented relevance with answers to the question “Who was Ian Sarabia before The Camerawalls?”

Ian is a music enthusiast who calls San Francisco his home during the duration of his stay in the US to study Film & Art, trying to live a life less ordinary. I don’t recall the reason why he went back to the Philippines, all I can remember is that he used to help manage a family owned bar he named Amoeba (after that record bar in Haight & Ashbury streets) situated in the same spot where Club Dredd in Eastwood Citywalk now operates. He grew tired of the place one night and randomly found his way in a Makati watering hole called Gweilos where Orange & Lemons regularly perform. We met and it wasn’t love at first sight… he just loved what he heard and the original music we performed, a breather from his distaste for popular OPM he simply cannot relate with. That was 2004. So from then on he continued to patronize my old band till we became best buddies. He goes by the name Bryan.

We shared the same level of passion for music particularly with Britpop. We often hang out at his place getting intoxicated with alcohol and Beatles records/videos/documentaries (among others) and endless talks about music, life and love. He introduced me to the music of The Stone Roses, one of his musical icons and to Vodka, his daily nourishment. I was amused with his idealism and free-thinkin’-not-a-care-in-the-world attitude and his love for Madchester.

Bryan appears to be a Pinoy version of Ian Brown especially when he is in the zone while the baggy beats is on air and alcohol is kicking in. We even call him “Monkey Boy” for that near perfect display of ‘Mank Attitude.’ This amusement made me want to form a band for Bryan.

Enthused with the idea we embarked on a search for proper band mates ending up with a who’s who line up of musicians to back him up like Boom Jose of Violent Playground, Dylan Vizcarra (NU 107 DJ/Jack TV Host), Jerome Velasco of The Teeth/Daydream Cycle and KT Dela Cruz. And the following year CONDO GUZ was born with reference to endless nights lazing in his condo unit.  Accordingly, Bryan christened himself with a new name to suit his ultra cool, rock and roll imaging. From then on he was known as SID. 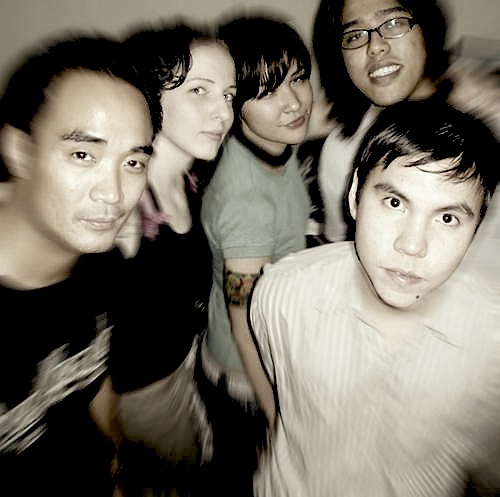 I have no idea how they pulled it off since things started getting busy and crazy with O&L promoting a new album, Sid and I hardly had time to catch up. And one night our music coincide with both of us playing in the same venue. His band and mine on the 9th of November 2005 performing baggy music no one dares to. And yeah, we were greatly entertained. Watch the video below of Condo Guz performing an excellent cover of a  Stone Roses tune called “She Bangs The Drums.”

Little do we know that the two of us will eventually end up as bandmates after 4 years of friendship bringing everything to another level. However uncertain I am on how Condo Guz came to an end, or how inexperienced Sid is behind the drumkit. I have every reason to follow my instincts of offering him a proper career as a musician. Friendship, passion, strong values and principles  — key ingredients for a lasting relationship as a band.

Many scorned at the idea. Some even called me desperate. I was approached by a number of seasoned musician with tempting offers. I just shrugged it off and patiently went on and christened him with a new name which is a duck soup to pronounce but spells two of the most influential music icons (Joy Division and The Stone Roses)  — IAN.

Now tell me, did I made the right choice? Oh, yes I did… since day one.