Our First Day In Singapore (Part 3)

continuation of Our First Day In Singapore (Part 2) – August 20

The past two weeks have been a little tied up and I’m lagging behind on blog updates especially the ones from Singapore. I mustered enough drive to rummage into my files and resume this compendium of episodes during our trip inside the Lion City. 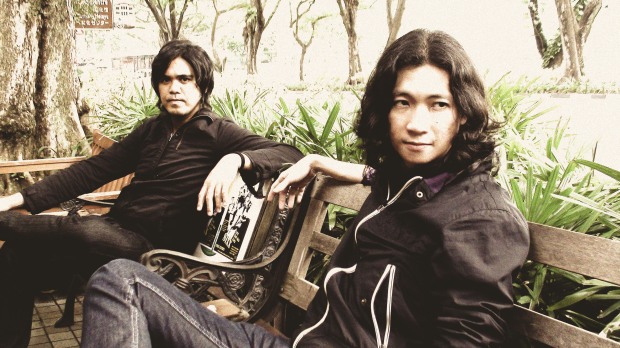 Along the street of Bali Lane opposite Golden Landmark.

Bali Lane is one of those little streets in Singapore (like Haji Lane) that seem edgy and spirited during the night gauging on the kind of shops one can find along the streets. Too bad we manage to pass on a bright afternoon. Apparently it’s the area where one can find Straits Records, the local underground record label and gathering place for Singapore’s indie bands and music lovers. 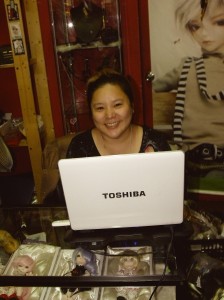 We did a stopover in one of the convenience store to grab some bottled drinks. Ian Zafra chanced upon a shop called Alice88th that display what seems like punk clothing and went in to check it out. We followed after a few minutes and found him chatting with a bubbly owner of  the place predictably named Alice. Turns out its a Japanese Sales and Rental shop of clothing and accessories with themes ranging from Anime, Manga, Gothic, Lolita, Punk, Party and Masquerade costumes even wigs, shoes, dolls and much more.

She was the most conversational person we met or probably was quite eager to engage in one judging on the fact there isn’t much passersby during those periods. So we stayed there for a bit checking out both odd and pretty items for sale. You can see what’s in store here: http://alice88th.blogspot.com

In between testimonies and recommendations (what do do and where to go) for first timers in Singapore, our exchanges also covered the story of her beloved cat Ming-ming. The subject was brought up when we noticed a cute but snob feline friend roaming around the store while I pointed at a photograph of a cat displayed in one of the glass display table. Surprisingly she told me the one in the photo was a different one and only looks identical to the cat she currently houses. 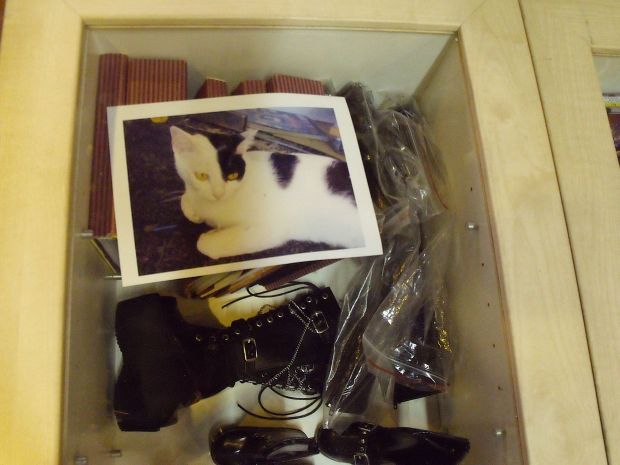 She lost her cat when she left Ming-ming under her neighbor’s care, caged and all during a long trip outside the country. She was never treated that way and her theory is based on the trauma and agitation her cat experienced. So when the opportunity for escape presented itself, Ming-ming left and was nowhere to be found. It was an agonizing three months of grieving and searching, even spending some days sleeping on the sidewalk just to find her. Alice told us she almost went crazy, couldn’t eat and sleep. It was never the same without Ming-ming sharing her bed during cold nights. 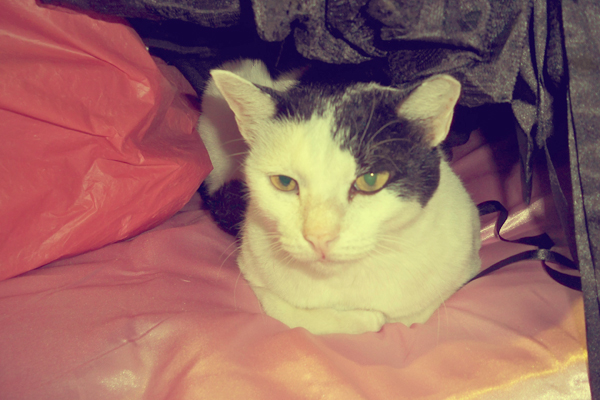 The sad tale was preceded with lighter diverse topics I can no longer recall till we bid her goodbye and invited her to our gig at Esplanade. We continued our course following Ophir Road going Northwest and crossing Victoria Street, Rochor Canal Road and Jalan Besar till we reached our next stop – Little India. 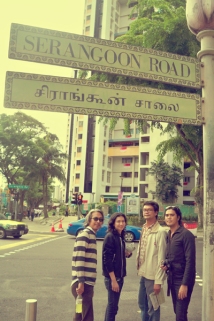 Along the way we entertained ourselves watching people and buildings, taking more photos, occasionally conversing with stray cats and mingling with a bunch of pigeons. We notice something odd in some residential high-rise buildings. A number of them have at least five removable pole fixtures protruding from the  lower portion of their apartment windows which tenants use to hang dry their clothes. A rather unusual find.

I found an illustrated walkabout of Little India on the back of our city map and we all decided to follow it. It begins at a point besides Tekka Market/Center along Serangoon Road.

Little India is another ethnic neighborhood in Singapore with cultural elements of Tamil people. Tamilians are a linguistic and ethnic group native to Tamil Nadu, a state in Southern India. The language, literature, art and architecture have been given classical status. They have been referred to as the last surviving classical civilizations on Earth.

From Tekka Market we crossed Serangoon and went inside Little India Arcade – a labyrinth of shops selling all things Indian (arts, crafts, sweets, snacks, medicine). As we march along the busy streets we marvel at the wealth of the culture. 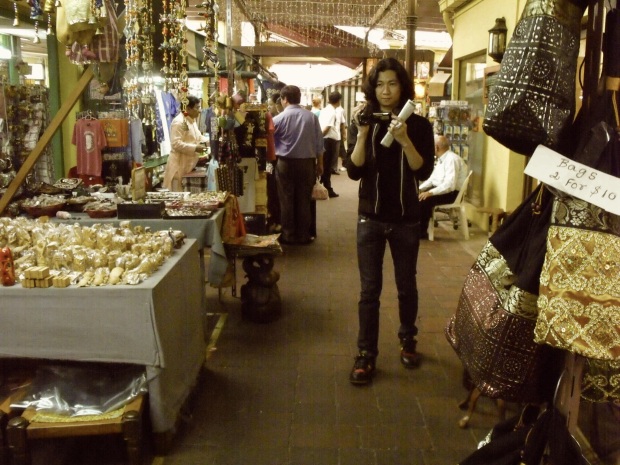 Another thing we noticed everywhere we go are installations on the streets of tents with food offerings, Chinese lanterns and pots for burning items like paper. Antonette, our roadie, explained that in Chinese tradition, August is a month of bad luck where activities like weddings and traveling are suspended. Further research led me to sites explaining the Chinese Ghost Month – the most inauspicious time of the year.

The Chinese seventh month, usually August, apparently is the most ill-fated time of the year. It is called Ghost Month, and its climax is the Festival of the Hungry Ghosts. Like a one month holiday for the dead during a time when spirits of the dead wanders, Chinese offerings and prayers are taken seriously anywhere in the world. Even in the streets of Little India.

Performances are also common to entertain the dead. We went near one of the stage and took notice of two young Chinese kids rehearsing on a Hammered Dulcimer and some drum percussion.

A stage in one of the streets of Little India with young Chinese kids rehearsing.

The lovely sound of the dulcimer made us pause for a while to observe and listen. It’s a musical instrument typically trapezoidal in shape with strings graduated length are stretch on the sounding box and is played by being struck with hammers or mallets made of wood. First time I heard and seen it being played in close proximity that I even have to ask what instrument it is. If you are curious what it sounds like watch the clip below.

We finished a third of the walkabout route before deciding to head back to Dunlop St. to find an authentic place to eat. Our excitement level is still high but the 5 hour walk around the city already made us a little worn out. Funny enough, Bachie (our drummer) is already complaining of blisters.

We found a nice random place to eat called Sakunthala’s which serves a variety of South Indian cuisine. Later on I found out it won various recognition from the media. Lucky for us to find such a place in the busy streets of Little India. We tried their Mutton meal, a Poori Set, Chappati and Massalla Onion. True enough it was the best tasting Indian food I’ve ever had. 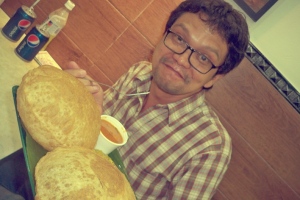 A renewed strength swept over us after that orgasmic delight. Dusk was falling rapidly as we left the restaurant heading back to our hotel happy and contented. Along the way we took a different route and found ourselves walking along the road where the Sri  Krishnan Temple and the Goddess Of Mercy Temple were located and brightly lit. It started to drizzle so we hurried along to rest for a a couple of hours before we catch Techy Romantics’ set plus other bands at the Arena in Esplanade.  – continued at Our First Day In Singapore (Part 4)…