Monday, April 23. At this point we were already halfway with our tour with mighty interesting gigs and experiences in Cebu, San Carlos and Bacolod. It’s a non-gigging day so we have time to kill. Luckily plans have been made to check out the grand opening of the Pasalamat Festival in La Carlota City in the evening. But not before we had our fill at the Manokan Country of Bacolod.

DJ Christian (Easy Rock Bacolod) and Erwin (Love Radio) picked us up from Northwest Inn. It was a short late lunch date. We each had a stick of the well-known Chicken Inasal best eaten with bare hands.  Bacolod Manokan Country has more than a dozen stalls serving grilled chicken, intestines, liver, heart, seafood, etc. Most, if not all, of the restaurants have female names like Aida, Carmen, or Nena. Our host guided us inside Nena’s Beth, one of the largest restaurant in area.

Their Chicken Inasal is well done and perfectly grilled. Better tasting and larger than the ones we’ve tried in Manila. 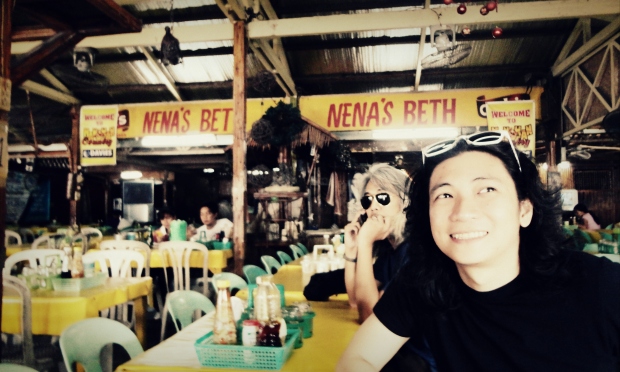 At Nena’s Beth – one of the largest stalls in the strip. 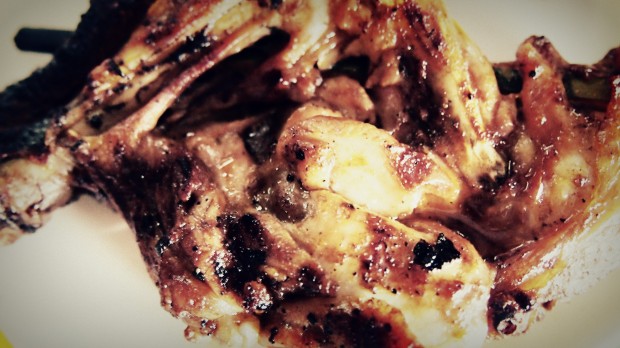 Their chicken inasal is well done and perfectly grilled. 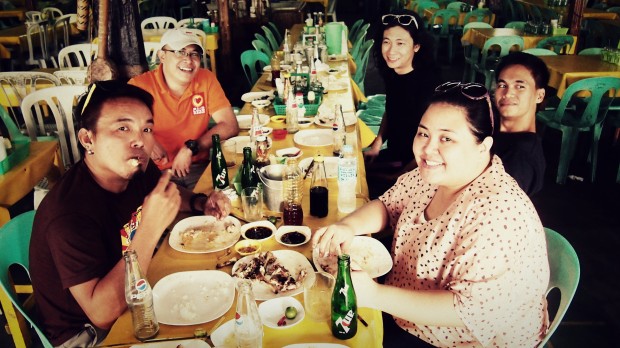 Utensils are not served by default. Customers are encouraged to eat using their hands.

With the restaurant owner.

A typical vendor outside the restaurant. Some sell pirated DVDs.

A common item for sale in Bacolod famous for their Maskara festival.

Pasalamat Festival is an annual celebration at La Carlota City, Negros Occidental held every last week of April or first week of May. It is based on the tradition of thanksgiving to the gods after a bountiful harvest by the ancients.

It took us an hour to travel from Bacolod City to La Carlota City. We were a bit early for the opening ceremonies so we decided to have dinner in one of the barbecue stalls. The production for the grand opening was massive. Accompanied with drumbeaters, street dancers, rondalla ensemble, fireworks and lighting. The huge crowd didn’t mind the heat and I can definitely say it was worth the wait. 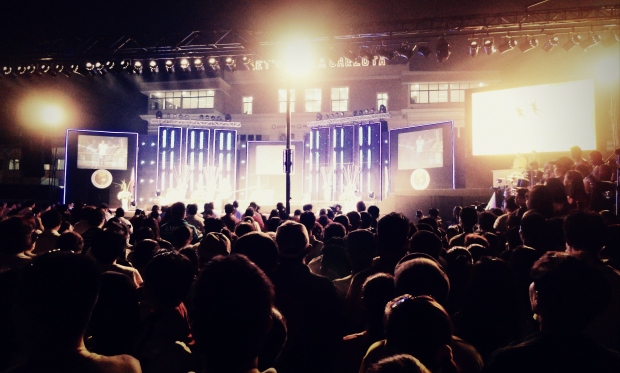 In the haze of a large crowd waiting for the the program to begin.

I was standing right beside the confetti machine. Took me by surprise! 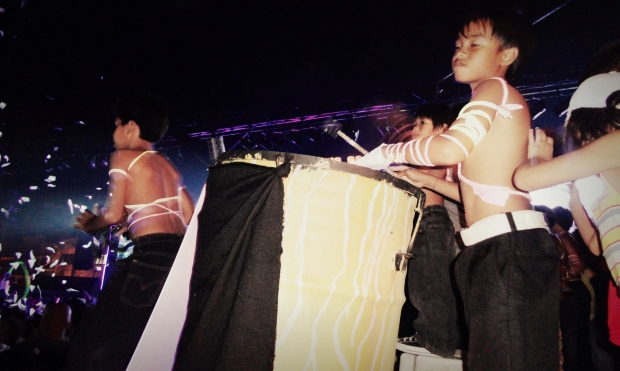 One of the members of Gruppo Tribale, a popular drumbeater group, invited us to witness the rehearsal of Tribu RSB, a young drumbeaters group and reigning champion in the Pasalamat Festival street dancing competitions. The contest will happen on a Sunday and since we won’t be around, we might as well check it out.

We were amazed on how great they are! While drinking on the sidelines we watched the full length of the rehearsals happening right in front of us. 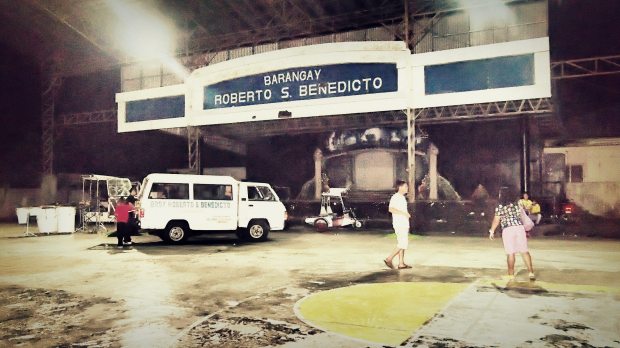 At the RSB basketball court to witness Tribu RSB’s rehearsals.

Tribu RSB – the champions in the recent Pasalamat Festival competition.

Guess what are these for. 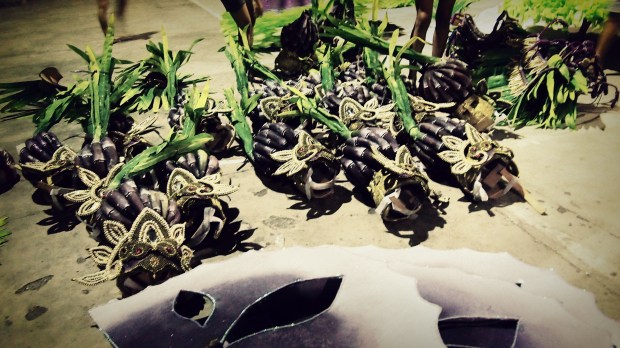 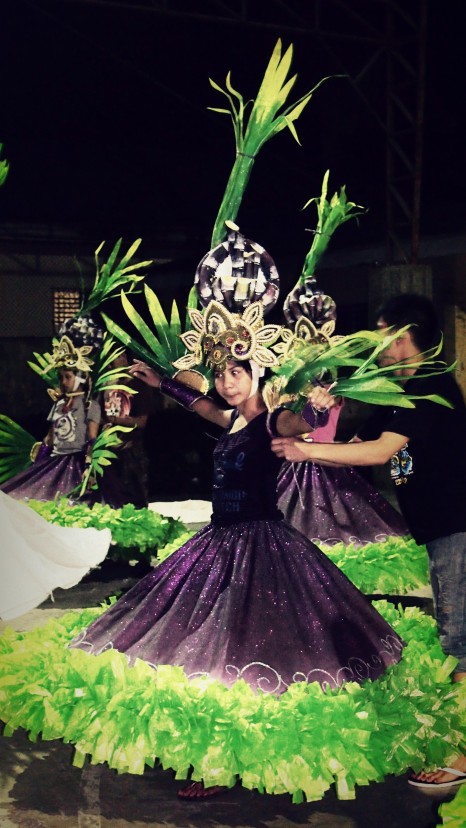 I also found out they won the competitions and became grand champions in the Pasalamat Festival. You can read the story HERE published on Sunstar.

A photo with excellent drummers and percussionists – Tribu RSB!

After the exciting, spirit lifting rehearsal, we went back to the plaza to continue drinking. Found a nice spot on the sidewalk. While listening to Parokya Ni Edgar playing on stage we had our fill of beer, boiled nuts, balut, and barbecued chicken. Again, our sincere thanks to our promoters in San Carlos City – Mary & Guido – for tagging us along. 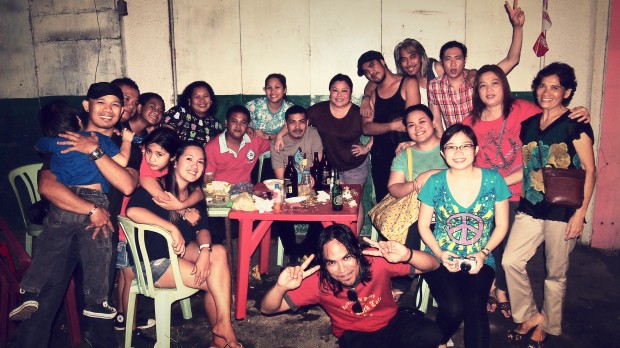 Drinking the night away on a sidewalk.